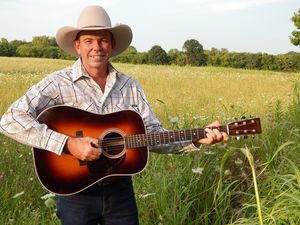 There is an old saying “write and sing about what you know”, and having been raised and still working on the family cattle property "Bowenfels", a soul of pure country is a natural thing.
Dean’s credibility as a writer of Australian Bush Songs goes unquestioned.  When not making music, he is in the saddle on his family’s Queensland cattle property.  Just like Dean, the songs he writes and sings, are very authentic and genuine.  This is why the great Australian music genre, the Bush Ballad, is so important to him.
Over the last 32 years, Dean has gained his place as one of Australia’s favourite Bush Balladeers and leading traditional Country Artists.

Dean and his sister Kerri recorded their first album “Australia She’s Mine” in 1989.  That first album gave Dean a love for recording and production.  Since then Dean has released a stable of great traditional Country and Bush Ballad albums.
With the release of Dean’s 2021 album “Kind Seasons”, his tally of albums now stands at seventeen.

Dean's recording resume is compiled with some of the greats like Stuie French, Michael Vidale and Larry Maars (USA), and also having many great names playing on his albums from both Australia and Nashville, Tennessee.

Gospel music is also very true to Dean’s heart and with the release of his Bluegrass Gospel Album, “The Shelter of the Cross” in October 2013, Dean got to showcase another of his great musical loves, Gospel and Bluegrass.
Artists such as Lee Kernaghan, Anne Kirkpatrick and Troy Cassar-Daley have such a respect for Dean’s music that each of these artists has recorded duets with Dean on his albums.
January 2012 saw Dean added to a very exclusive list of Golden Guitar winners, when he was awarded Bush Ballad of the Year for his emotive duet with Lee Kernaghan, “Channel Country Ground”, followed by a further 2 in January 2015. One for Bush Ballad of the Year for “Bloodwood and Clover,” and the second for Vocal Collaboration of the Year for the duet, “My Country My Land” recorded and co-written with Troy Cassar-Daley. 2018 saw Dean add another Golden Guitar to his collection with "Henbury Blues" written by Neville Anderson.
His latest Golden Guitar win being 2021 for Bush Ballad of the year with "Six Decks to Darwin" written by Dean, Kelly Dixon & Cattle transport driver, Ryan Garland.
In 2015 Dean was given the honour of being inducted into the Australian Country Music Hands of Fame.

Dean has performed at major festivals around Australia as well as touring with his own shows to many locations nationwide.

His music is traditional yet fresh and modern.  With a sound that is uniquely his own brand, Dean is set to make great Australian Country Music well into the future.